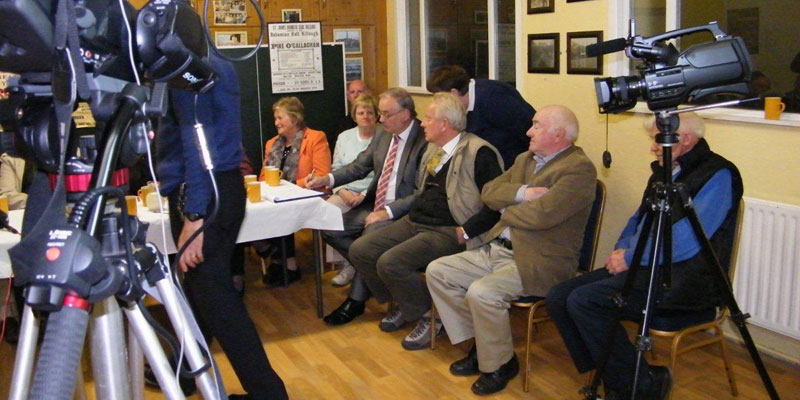 Killeagh parish is located in the eastern end of County Cork and forms part of the Diocese of Cloyne in the Barony of Imokilly.

Killeagh parish is located in the eastern end of County Cork and forms part of the Diocese of Cloyne in the  Barony of Imokilly.

Anne O’Neill, chairperson of the group sent the following:

After the successful launch of our book, “Killeagh Parish Through the Ages” in 2011 many parishioners offered more family stories. Yet others asked if we were interested in amusing stories and films of the parish going back many years. We soon realized we were entering the realm of folklore that would be of interest to everyone not only in the parish but also historians, the diaspora and a worldwide audience.

Thus the Folklore project came into being. After successfully applying for financial supports from South East Cork Area Development Ltd, our local film producer was coaxed to take the mammoth job on. With a cast of more than 600 the DVD covers all aspects of heritage from History, Sports, Schools, Theatre, Shops and Pubs ranging from bygone days to the present all extracted from audio interviews, 20 hours of film some clips dating back more than 40 years ago and in the case of stills back to the early 20th century. The film includes local GAA heroes, as well historians, noted authors and the Cork County Archaeologist an expert on medieval communities in East Cork thus able to provide an insight into how our ancestors lived more than 1000 years ago.

To overcome the reluctance of one–to-one interviews we decided to go the way of group film recordings in the community hall selecting up to eight participants at a time. Without much fuss a preliminary interview was done on the night. Volunteers then sat around a table facing the camera and the agenda was allowed to flow freely from the discussions. Everyone present including the audience were asked to sign an attendance register and participants were given the opportunity of viewing the unedited film material on the understanding that portion or whole of the filming would be removed from the records if so desired.

Audio recordings were carried out mainly on a one-to-one basis our policy being to respect the wishes of anyone not eager to be recorded. Detailed notes were taken of on-site visits with the approval of the interviewees and used as editorial material.

To supplement our huge database we recorded film footage of local historical places, farms, dances, clubs as well as an extensive coverage of schools who were only too happy to oblige. The difficult task of getting parents permission was left to the teachers. Past Pupils and teachers successfully racked their brains for stories and anecdotes of the past and made huge folklore contributions.

Twelve months later the task of editing the material and making commentaries fell on Historical Group members and local pundits under the supportive eye of our local film producer. They eagerly set about sifting through piles of information to make the stories come to life in the form of a DVD a process which took 3 months.

The final DVD comprised three discs all the while parishioners coming forth with more stories, requests for interviews and still images as word spread that the DVD was about to be completed.

More than 350 DVD sets have been sold to date many of which have gone to relatives of parishioners living abroad. They were eagerly snapped up as Christmas presents also.

We are proud to be the only parish in Ireland to have produced a full length history book and Folklore DVD in the space of 3 years, both projects bringing the parishioners much closer together as a proud community.

This website uses cookies to improve your experience while you navigate through the website. Out of these cookies, the cookies that are categorized as necessary are stored on your browser as they are essential for the working of basic functionalities of the website. We also use third-party cookies that help us analyse and understand how you use this website. These cookies will be stored in your browser only with your consent. You also have the option to opt-out of these cookies. However, opting out of some of these cookies may have an effect on your browsing experience.
Necessary Always Enabled
Necessary cookies are absolutely essential for the website to function properly. This category only includes cookies that ensures basic functionalities and security features of the website. These cookies do not store any personal information.
Non-necessary
Any cookies that may not be particularly necessary for the website to function and is used specifically to collect user personal data via analytics, ads, other embedded contents are termed as non-necessary cookies. It is mandatory to procure user consent prior to running these cookies on your website.
SAVE & ACCEPT
Translate »